A Driving Force sharing a common goal, to go racing and enjoy the thrill of Motorsport

Formed in 2012 by Nik and Katie Grove and now co-owned by Carlo Turner, the team competes in the 750 Motor Club Endurance series racing a BMW Motorsport-build E87 130i.

Drivers, Nik and Carlo, alongside their equally passionate support team of friends, family and sponsors, travel the UK and Europe to fulfil their passion for the sport. From racing at some of the UK’s leading race tracks including Oulton Park and Brands Hatch to international Formula 1 status circuits including Silverstone and Spa-Francorchamps, Storming Camel share a common goal…

To go racing and enjoy the thrill of Motorsport

The Storming Camel Motorsport team officially came into being in 2012 after the two initial drivers, Nik Grove and Phil Carney, decided that after a decade of supporting motorsport, dozens of trips to the Nurburgring and many UK track days, it was time to get competitive. Supported by Katie Grove as the Team Manager, the team was created.

After a lot of deliberation, Storming Camel was chosen as the team name, narrowly beating Peppermint Rhino Racing. Wherever possible the car has always been run under the number #101 – a combination of Katie’s birthday.

The team, sponsors, supporters, family and friends have travelled the UK, and occasionally Belgium, racing in club level motorsport building towards the time we’ll be able to step up to Pro-Am racing in series like Britcar, BritishGT and one day… Le Mans.

After the team was formed Nik and Phil had to pass the necessary exam and practical tests to gain our ARDS National B race licenses which took place in September 2012. Even before that though – the first race car had been acquired; a BMW 318Ti Compact from the Compact Cup Series – SC1. 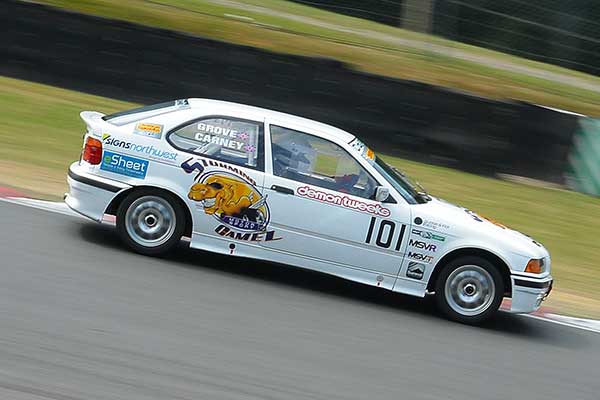 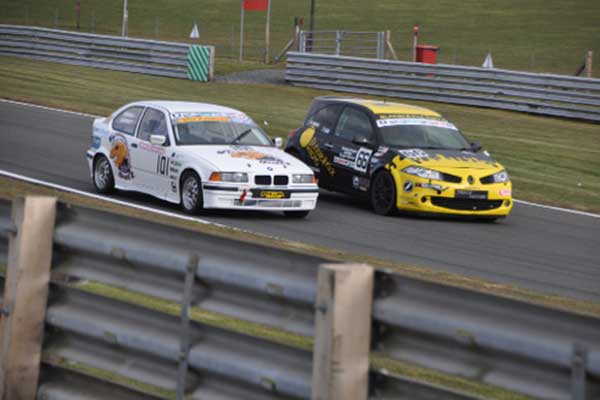 Our first race season was in the MSVR Trackday Trophy series – dedicated to novices with less than 6-races experience.

Amongst our peer group, racing in Group D we achieved a level of success not seen again for many years; two overall class wins at Oulton Park and Brands Hatch with four other podium placements at Silverstone, Snetterton, and twice more at Brands Hatch.

The new year started with a new car. Despite the overwhelming success of SC1 and a trophy cabinet full of silverware the decision was made to acquire a significantly more powerful BMW E36 328i – predictably christened SC2.

Despite a rough start SC2 would be with the team for the next six years.

As SC2 was only a track car when it was purchased a large amount of development was needed in 2014 so there was a relatively light race schedule and a focus on optimising handling and pace. After installing the necessary safety equipment work was needed on the suspension and braking. 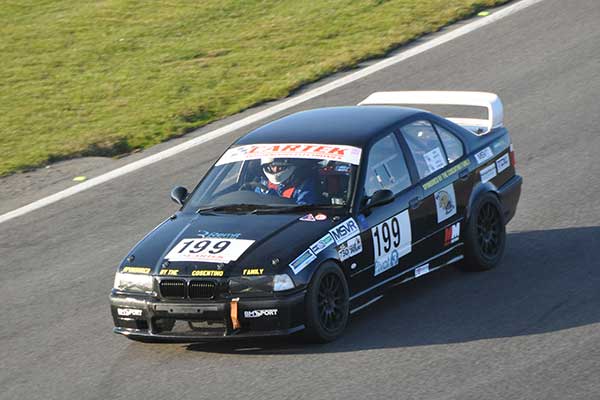 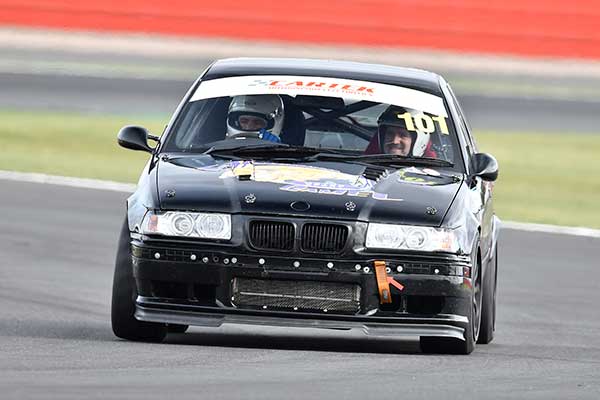 A very quiet year for us but our return to Silverstone for the 6-hour Birkett Relay race was a particular highlight and an introduction to the 750 Motor Club who were about to be big part of our future.

After the race Katie and Nik met a guy in a pub who said he wanted to come racing… almost the exact same day as Phil announced his retirement from racing.

The guy from the pub turned out to be Carlo Turner and he did want to go racing. After getting his race license, race kit and contributing to the team, Nik ran out of reasons why he couldn’t drive SC2. And when he did he was very quick; almost at the same pace as Nik around Brands Hatch within a few laps on Day 1.

Carlo made his race debut at Silverstone in May 2016 in a Trackday Trophy race but his career was almost immediately put on hold. Nik accidentally selected 2nd gear instead of 4th and blew the SC2 engine into very small pieces during our first entry into the new 750 Motor Club – Club Enduro series and resulting the in team’s first ever DNF.

After a complete engine rebuild the team made it back out – with Carlo – in another new series for the team, the 750MC RoadSports series at Rockingham. 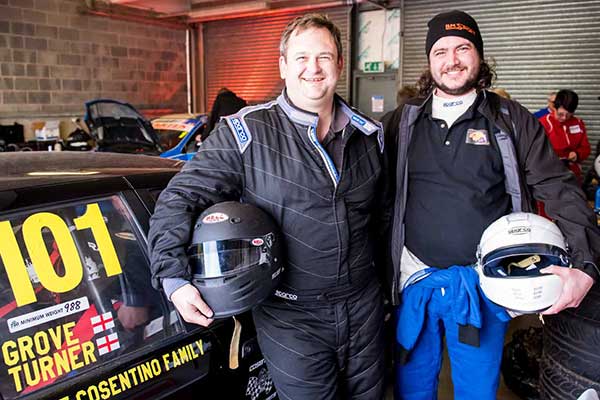 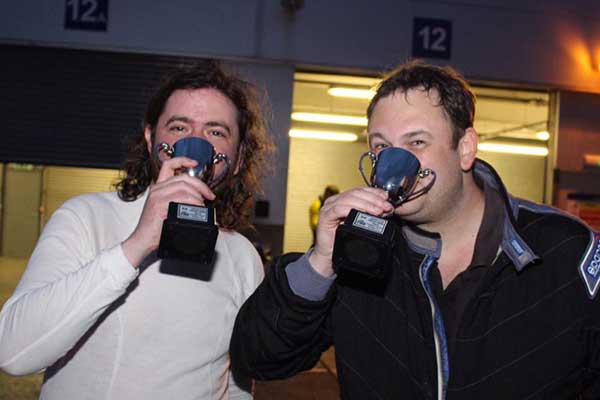 2017 was a busy year with races at Donington, Anglesey and Silverstone with Carlo learning the car and picking up our first silverware as a duo during Carlo’s home race at Donington Park on his first Club Enduro outing.

Anglesey was our first ever 3-hour endurance race and then it was back to Silverstone and another podium for the team.

Wrapping up the season was the teams first international outing with a trip to Belgium and an endurance race at the legendary Spa-Francorchamps circuit.

The team focussed on the Club Enduro championship in 2018 with entries into 3 rounds at Silverstone, Rockingham and Oulton Park.

Oulton was our second ever DNF after the normally bulletproof E36’s oil breather system let go on the fourth lap and Carlo had to retire the car. Despite being Nik’s favoured track this was not the end of our bad luck at Oulton…

The season did end on a fantastic note though; our second trip to Spa ended up with us standing on the F1 podium at the end of the international Club Enduro event; our most celebrated trophy before or since. 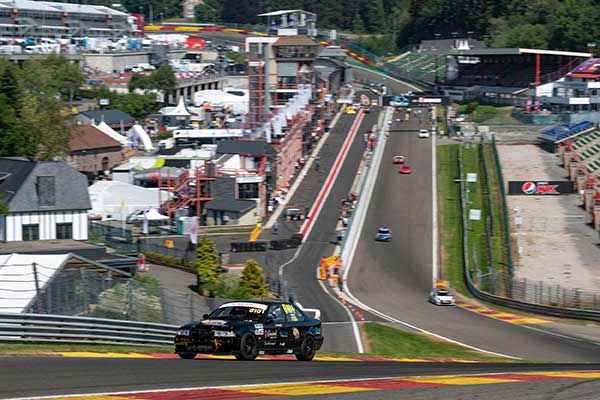 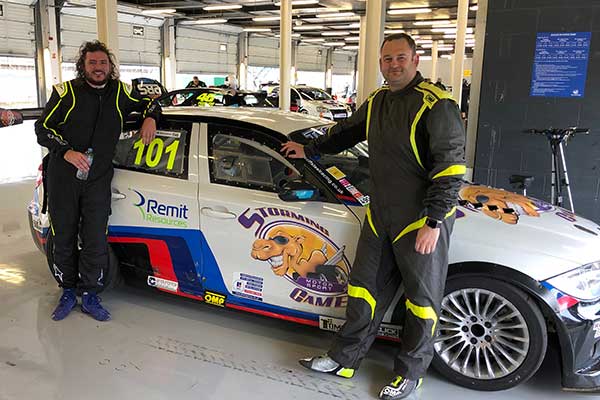 The 2019 season started with a major team re-structure. After three seasons with the team Carlo and Nik jointly invested in the teams’ 3rd new race car; a BMW E82 130i.

The 2019 season mainly revolved around testing and development of the new car with a single entry at Silverstone to evaluate our competitiveness against the new Class B cars we’d be racing against in 2020. There was work to do…

Despite the pandemic chaos in 2020, the team still managed to get out on track for some more testing and development and entered two races.

The Silverstone event was going well until part of the dash dropped off and hit the fuel cutoff switches. Carlo recovered quickly but any chance of silverware was lost.

The second race at Oulton Park ended with a clutch failure on the second lap and continued our run of DNFs at Oulton. 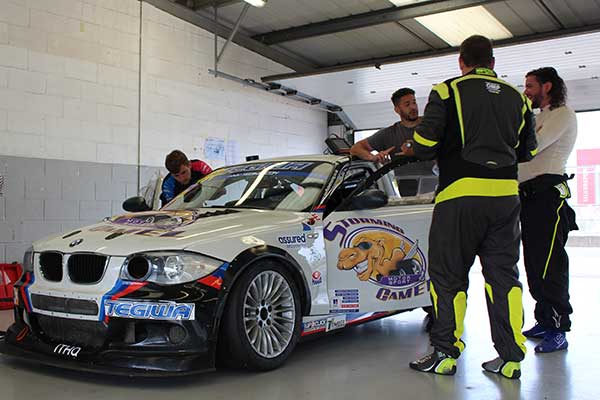 After nearly 10 years of having a commercial support team bringing the car to the track and providing technical support and race engineering the team decided to bring it all back in-house and run the car ourselves.

We hired a couple of brilliant young engineers with advanced degrees in motorsport and started Storming Camel Motorsport Limited.

2022 will be our first serious attempt at a championship campaign in the SC3 BMW. After a series of modifications and tweaks, 2022 is going to be a very exciting season for the Storming Camel team and its sponsors.

If you’d like to be a part of our future journey, please get in touch, or follow all the latest news right here on our official website.